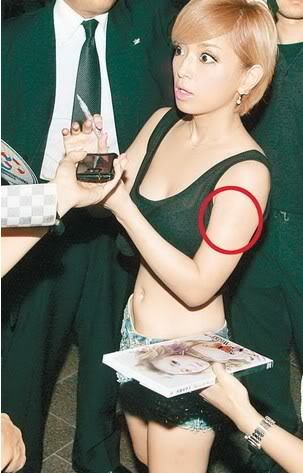 2 nights ago, Japanese Pop Queen Hamasaki Ayumi did fan service for her lucky fans when she turned up in singlet and shorts, revealing her waist as well as a strange teeth mark-like wound on her left arm! After dinner, Hamasaki stayed out to party till late, and concluded her 3-day stay in Hong Kong yesterday with a flight to the US!

When Hamasaki arrived on Saturday, about 200 fans turned up at the airport to welcome her. 2 days prior, she abruptly changed plans and prolonged her stay in HK. At 7:45pm that night, Hamasaki left the hotel with many staff members and rumoured boyfriend Shu-ya, satisfying fans who had been waiting for hours.

Staff wields fan to cool her down

Hamasaki, who had been dressing in a sexy manner throughout the trip, continued the trend with a singlet and low shorts, revealing her tummy and waist, as well as a tiny portion of the tattoo on her lower back we glimpsed on the jacket of new album 《FIVE》. She was extremely responsive and friendly, walking up to the fans to sign autographs and take photos. Meanwhile, her staff wielded handheld fans to keep her cool, but Hamasaki’s chest and back were still covered in sweat. In addition, a large wound which looked like teeth marks could be seen on her arm. Shu-ya was by her side the entire time, talking and joking with the fans.

After satisfying the fans, Hamasaki boarded a 7-seater car and headed to Causeway Bay for dinner, and only returned to the hotel late at night. Early yesterday morning, Hamasaki and her staff left the hotel for the airport, where she made a last-minute decision to fly to NY instead of back home. It is believed that she is going to meet up with her husband. 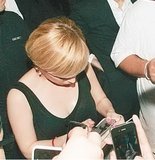