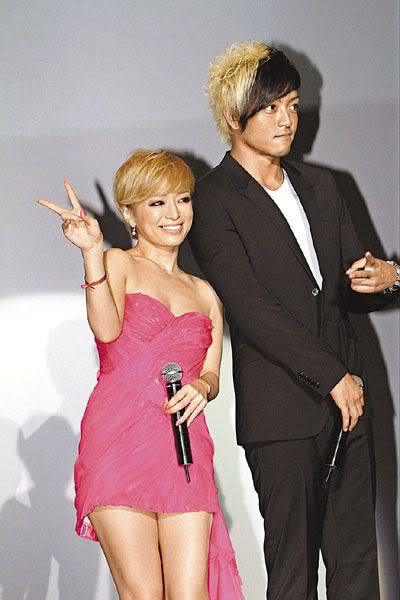 Following news from Hong Kong media, Japan’s Pop Queen Hamasaki Ayumi reached Hong Kong Airport at 1:30pm yesterday. She is here to promote her 2nd 3D concert movie. When Hamasaki, who is already married, appeared on the arm of former rumoured boyfriend dancer Shu-ya, the near 200 fans present erupted into chaos. Brazenly holding onto Shu-ya with one arm, Hamasaki shook hands with fans for nearly 15 minutes before leaving.

That day, Hamasaki spent nearly 2 hours within the private area of the airport changing her clothes and make-up. She emerged wearing a low-cut long skirt which revealed her cleavage, stunning both the media and fans. The already-married Hamasaki held onto the arm of former rumoured boyfriend dancer Shu-ya the entire time, and shook hands with fans with her free hand, displaying her friendly demeanor. In the midst of 200 fans and 30 bodyguards, Hamasaki also tried to help fans who had been pushed down, but was too surrounded to come to their aid. Some fans lost their shoes, bodyguards lost their hats and lights, and a cameraman was even manhandled by a bodyguard. Hamasaki managed to emerge from this chaos only after 15 minutes.

Hamasaki then changed into a low-cut, short dress for the movie premiere showing. Once again holding onto Shu-ya, she was totally unafraid of invoking jealousy in her foreign husband. First, she introduced herself in Cantonese, then conducted the rest of the session in English. She said she was glad to be back in HK, and would love to explore, but since she could only stay 1 night, she could not do as she wished. She also pointed out the difficulties in making this movie, but proudly stated that she had made new history. She added that, without the fans’ support, she would not have succeeded. Next, she shared her motto “Seize the day”, because life is short, and she hoped her fans would treasure each day. On the other hand, Shu-ya was all smiles and jokes, teasing Hamasaki for being too fierce and a crybaby, but very serious with her work and that she is an inspiration to him. After that, the two took a group shot with the audience, then left hand-in-hand. That night, Hamasaki travelled to Causeway Bay to attend the “Love & Hope + FIVE” photo exhibition hosted by good friend Leslie Kee.

1 thought on “Ayu in HK Article from sina.com.cn”