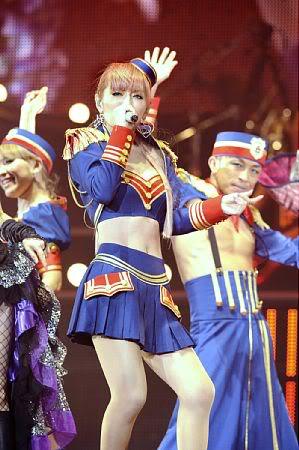 This also happened to be the day of her 15th debut anniversary. A congratulatory cake was brought up on stage during the encore session, and Hamasaki Ayumi commented, “That was shocking. My mind was so full of the show that I forgot about this.” She then took a commemorative photo with the band members and dancers, with about 17,000 audience in the background.

Her debut date, reflected even in her Twitter username 「19980408」, is an important day for Hamasaki. “All this time passed in the blink of an eye. Not much has changed, but we’ve been together for really long, faced so much together, and I am reminded of my gratitude to all my comrades again”. Though she made no comment about her recent divorce, she is determined to “continue to run through my 15th year”.

Starting on the 7th, her 10th nationwide tour will last until 12 August, involving about 300,000 audience. The show is built around a fictitious 「HOTEL Love songs」, and the audience are treated as hotel guests. 21 songs, both new and old, such as 「how beautiful you are」 and hit song 「Boys&Girls」, have been performed.