I took part in Hamasaki Ayumi’s ARENA TOUR 2012 A ～HOTEL Love songs～ show at Osaka Jou Hall (Day 2). This time, the main stage is at the front, with a center stage connected via a runway. I was in the E-Block, which faced the stage directly, but I was really far away~. 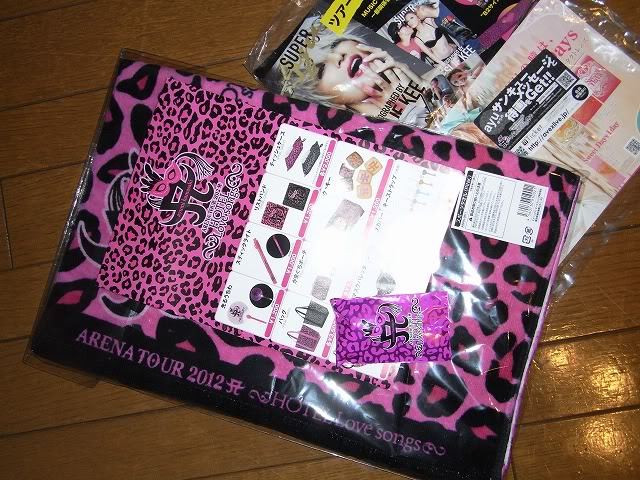 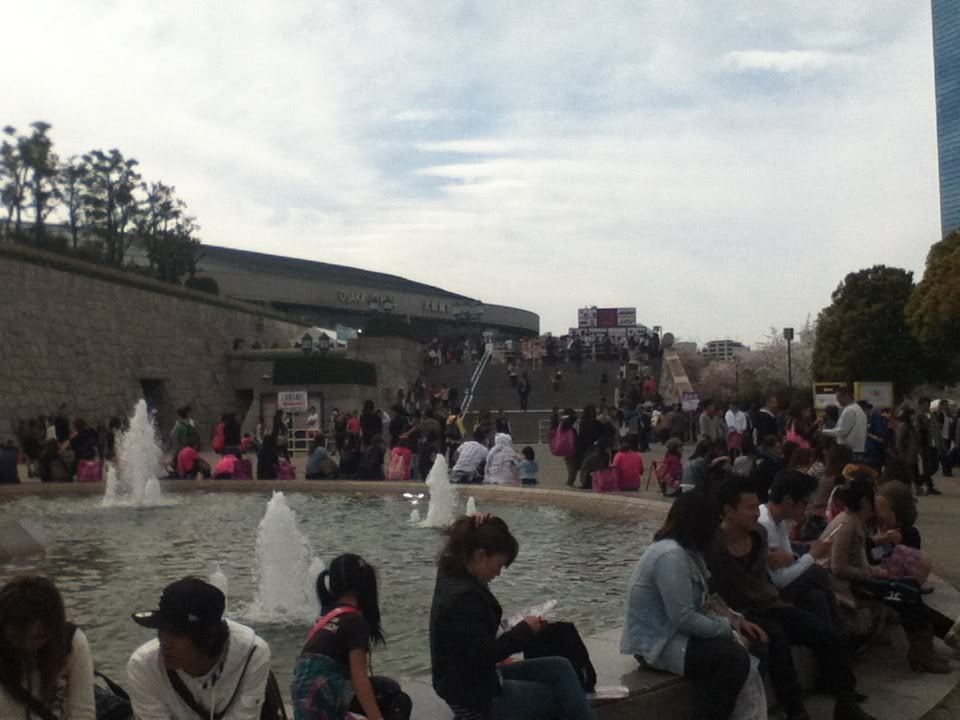 There was a festival going on in the park in front of Osaka Jou Hall, with roadshow performances and many food stalls around. This time, there weren’t any temporary stalls selling unofficial goods. Maybe the organizers closed them down? 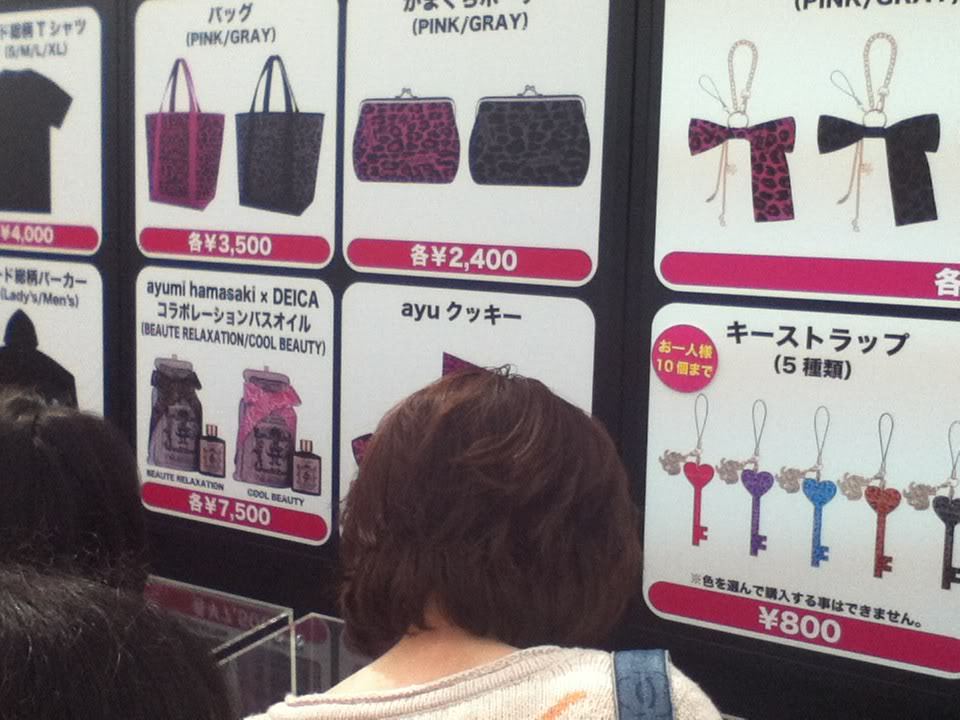 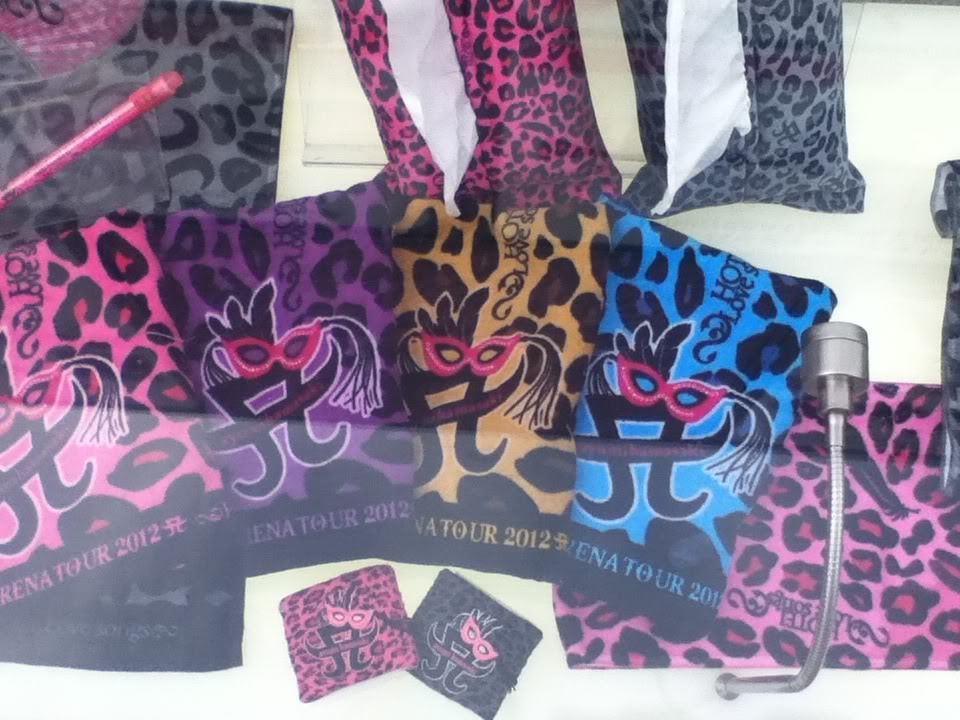 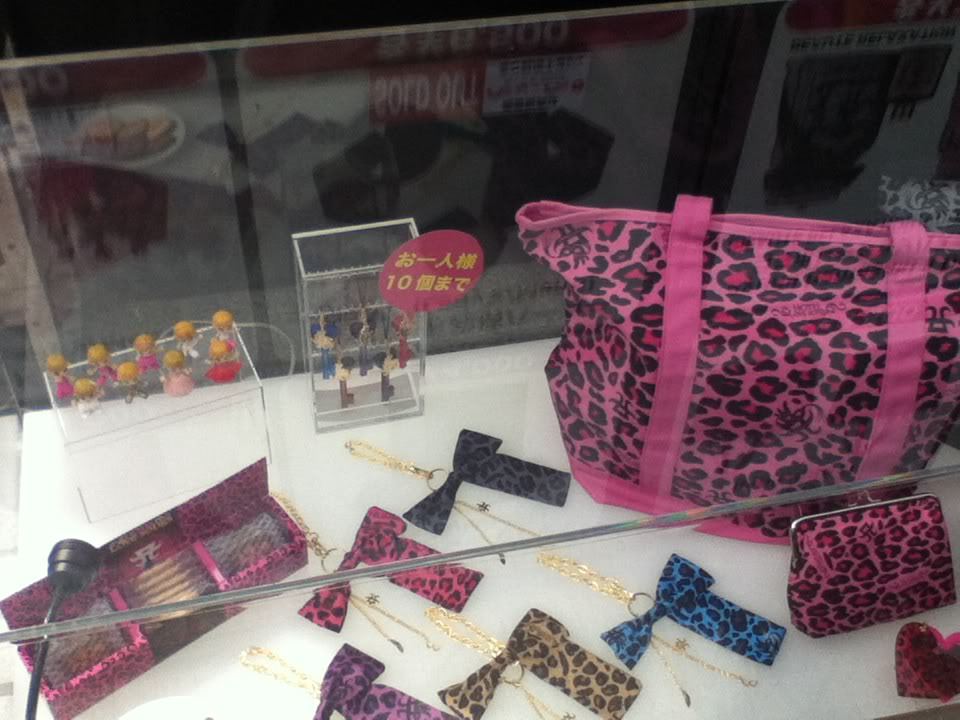 When I went for the tour in May last year, I had to queue for an hour in the rain to get my goods, but I managed to make my purchases this time without queuing. 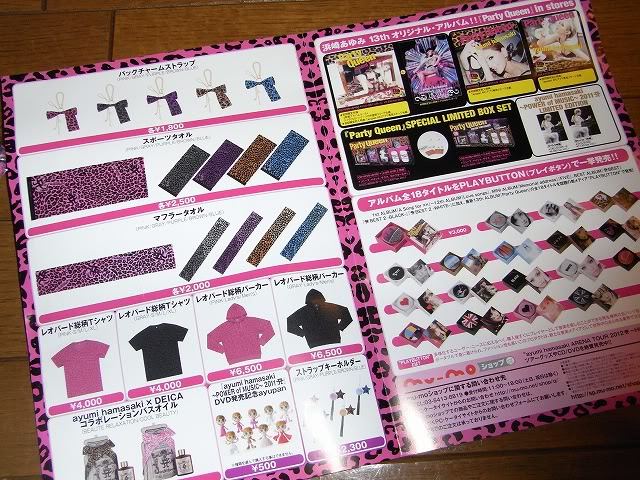 The parka was already sold out. 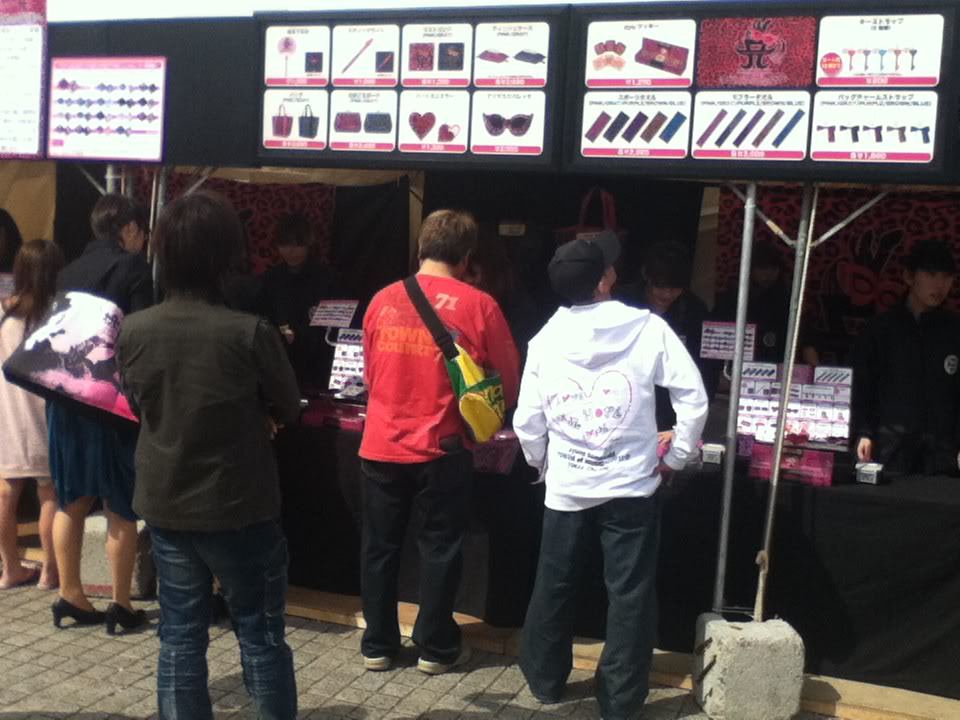 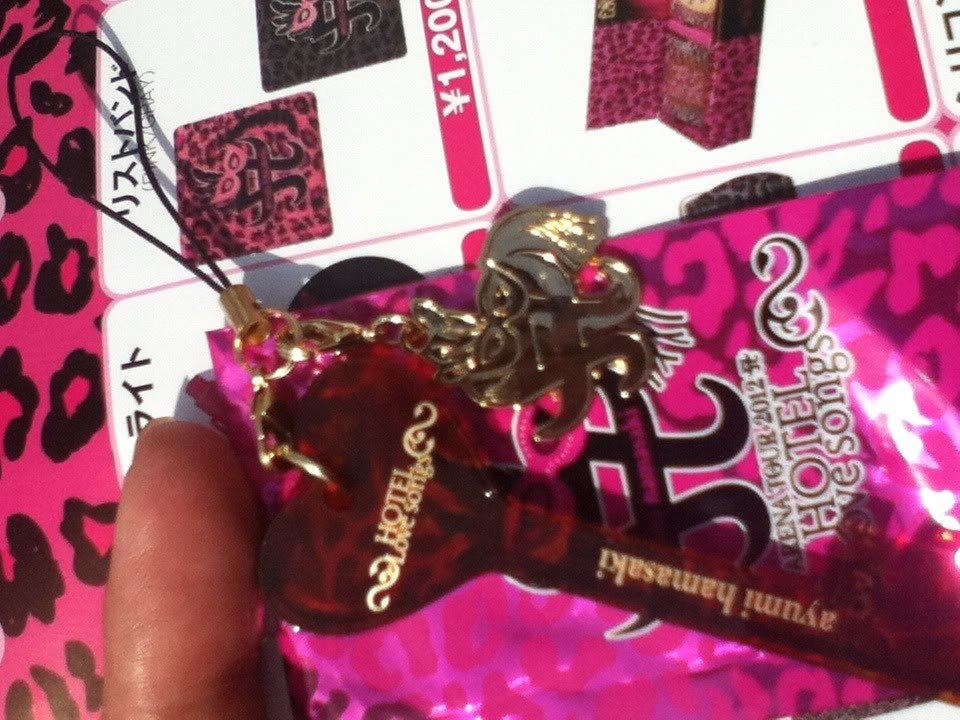 I bought a sports towel (pink) for ￥2,500 and a strap (random 1 out of 5 colors) for ￥800. I got the plain-looking brown strap. Since we couldn’t choose strap colors, there were people who bought lots of straps just to get their favorite color. I brought my sticklight and uchiwa from CDL last year, since both concerts have the same tour title. 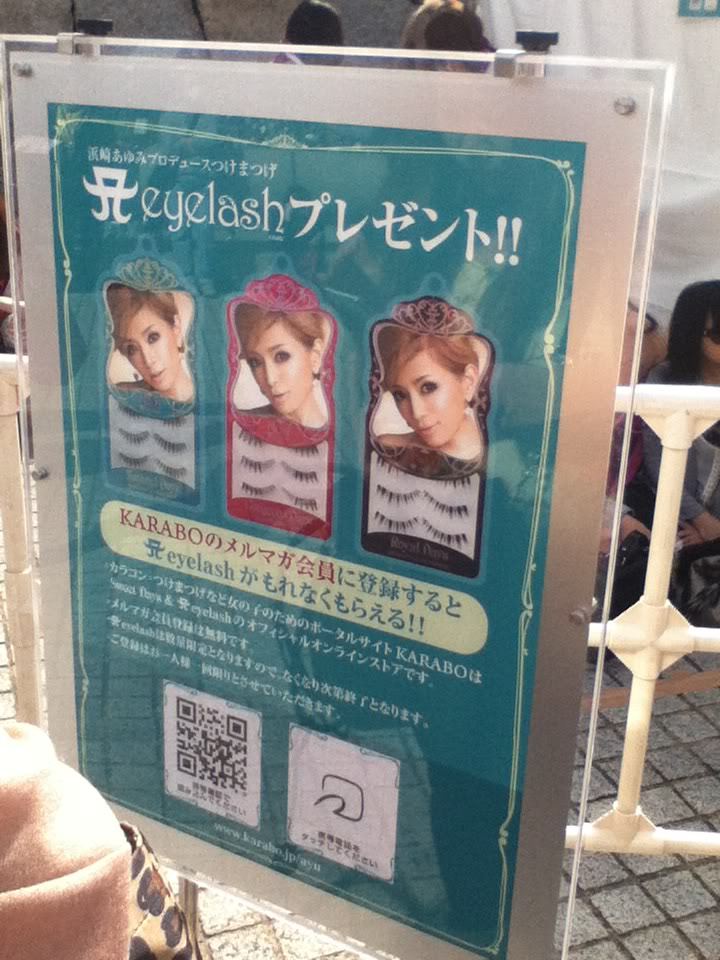 If you sign up for the e-zine at the venue, you’ll get ayu’s false lashes as a free gift. You can choose a design out of the 3. I guess guys can buy this too, but this promotion is definitely for the ladies… 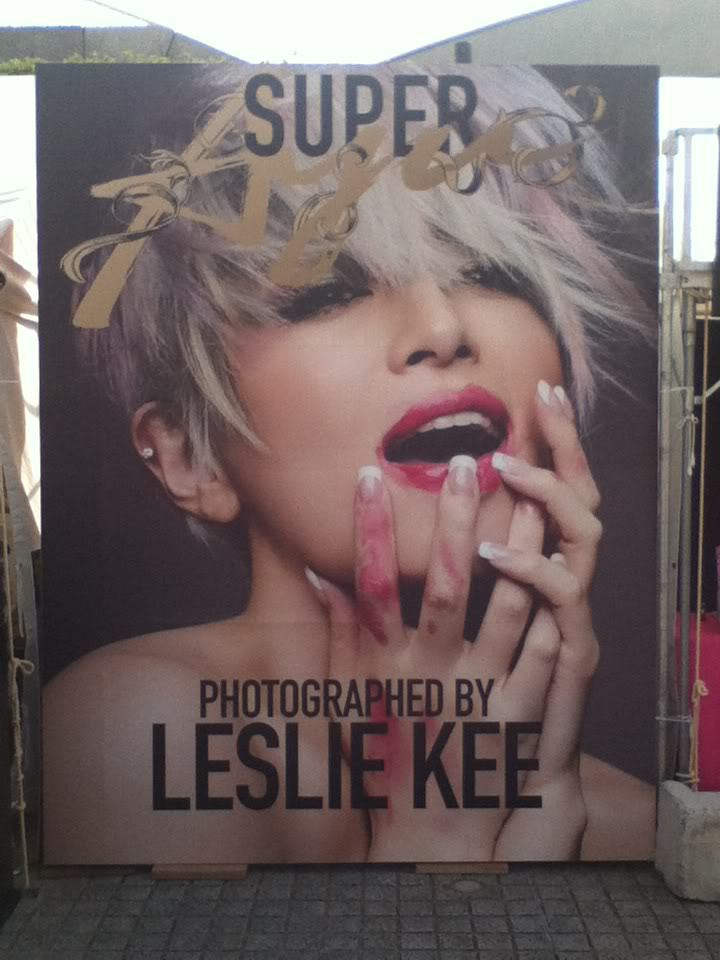 If you buy the CD/DVD/Blu-ray at the venue, you can join the lottery for the premium photobook. There were many fans who took photos with this poster.

This time, the main stage was on the West Side, with a round center stage connected via a runway. There is a large screen in the center of the stage, with sub screens on both sides.
The E-Block Stand seats were directly facing the stage so I could see everything, but it was really far away. With the center stage from last year, I could tell who’s who on stage with the naked eye, but with the main stage, I needed to watch the screens to recognize everyone. There was no fountain effect, but there was a laser show, which made the performance really beautiful. Recently, it seems like the laser lights include colors like blue and purple as well, in addition to the usual green and red.
The slanting bed and Party Queen’s LOVE sets from COUNTDOWN LIVE 2011-2012 are showcased in this tour too, so the audience can rewatch the performances. There were some minor changes too, but of course, it’s easier to tell when rewatching via DVD when it comes out.
During Sparkle’s “NONONO!”, there were not many people doing the action at first, but when ayu shouted “Together!”, most of the people joined in at the later bit. Sadly, there was no choreography lesson this time round.
The entire show lasted about 2 hours 30 minutes.
However, my seat was directly below the speakers, so the high pitches were painful to hear. My ears were almost ringing…

I need to get an Arena seat the next time round…
This year, everyone was really into the singing and dancing and getting high, and ayu’s performance and costumes were great too. The venue was really crowded, with standing tickets being sold. About 20,000 audience turned up over the 2 days.

During the encore, ayu commented, “Really, everyone at Osaka has such loud voices”. There were also less rude and interruptive voices during the performance this time round.
Requests from TA asked to hear Timmy’s voice, and he spoke to everyone, “Good evening, I am Timmy. Osaka is the first city I visited when I came to Japan.”

There were some minor changes to the setlist which had been revealed from previous shows. She performed call instead of Letter during the encore, followed by Boys&Girls and how beautiful you are. The dance performance during the encore was great too.

On my way out, I received a “ayu’s thank you message and screensaver GET” card. Via the QR code, I connected to the web and was made to sign up as a member of avexlive. I needed to supply an ID, password and some personal information to log-in, then I had to key in the codeword and do a survey.
The survey was on the concert, but the questions were so long… But I finally got my screensaver. I’ve tried it with my PC’s FireFox so far, but it doesn’t work.