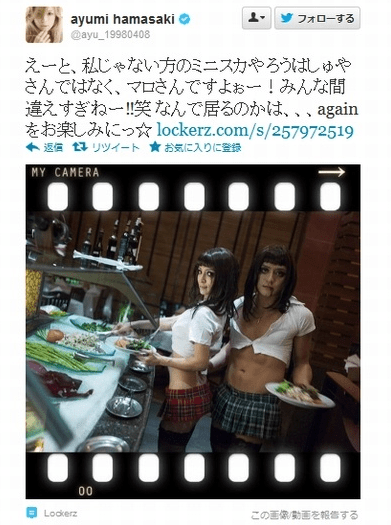 On the 14th, artiste Hamasaki Ayumi (34) and dancer Uchiyama Maroka (28) declared their devotion to each other. Both parties have confirmed this relationship.

The relationship was first revealed in “Josei Seven”, released on the 15th. Hamasaki has also announced the relationship via her official fanclub site, stating that “I am in a serious relationship with Maro-chan.” On his blog, Uchiyama commented that “As the person I am, I will take this relationship seriously from now on.”

◆Joining the tour in 2007, acting as passionate lover in PV

Uchiyama Maroka, whom Hamasaki lovingly calls “Maro-chan”, was born on 28 February 1984 in Tokyo. Having been exposed to dance and music since a young age, he made his CD debut in November 2005 as a rapper on “VARIETY VARIOUS”. On his debut single “Friends”, he collaborated with comedy duo KING KONG’s Kajiwara Yuuta.

In 2007, he joined Hamasaki’s concert as a back-up dancer, and has since played a major role in Hamasaki’s performances. Aside from choreographing for 2012’s “ayumi hamasaki ARENA TOUR 2012 ～HOTEL Love songs～”, his bed scene with Hamasaki was also a memorable and provocative performance. Then, in the PV for “You&Me” released in August, the two played as lovers. Embracing and kissing on Guam’s beach, their performance of a sweet and sorrowful “summer romance” also gained much attention.

Uchiyama is the coach for Aomori Yamada High School’s acrobatics team, and also does choreography for them. The team won the inter-school competition and national team championships in 2009, the national championships in 2010, and is currently aiming to become the 3rd time champion.

During the stage greeting for “A3D II ayumi hamasaki Rock’n’Roll Circus Tour FINAL～7days Special～” in August, Uchiyama joined 5 other dancers to appear alongside Hamasaki. The two often chatted together off-mike, showing off their close relationship. During the talk show, he also praised her, saying that “ayu-chan notices every little detail about everyone. Because she plans things to let each of us shine, we feel the urge to do our best as well. She’s truly the troupe leader”, to which Hamasaki replied “Thank you” with a smile. A strong sense of trust could be felt between them.

In the September issue of “SCawaii!” released in August, a private report about the “You&Me” PV was featured. According to the feature, the two would meet up to chat in between filming sessions and hold each other by the waist, exibiting signs of a pair of new lovers. Also, in the scene filmed in “his room”, Hamasaki was wearing Uchiyama’s personal T-shirt.

Hamasaki divorced Austrian model Manuel Schwarz in January this year. This new relationship between “singer and back-up dancer” will definitely grab much attention as well.