Meet “ayupan” in her room ☆
Just use the gachapon machine in the custom room to get the gorgeous items, such as furniture and fashion items, all produced by ayu.

※GEMs are the currency within “LINE PLAY”.

What is “LINE PLAY”?

“LINE PLAY” is LINE’s official avatar service.
In this free app, players can create avatars and decorate rooms to their own liking, make avatar friends, blog and chat.

Starting from the 13 April (Sat) show for “ayumi hamasaki 15th Anniversary TOUR ~A BEST LIVE~” at Saitama Super Arena, Orico will be opening booths at each concert venue.
Just register for either a JCB card or a VISA card at the booth, and the first 5,000 customers will receive a venue-limited original tote bag!
*Online registration will begin from 15 May (Wed).

・Let’s get some autographed tour goods ♪
All customers who register by 31 July will be entitled to enter a lucky draw, where 15 winners will get an autographed T-shirt or sports towel as a present!

・Let’s get some original postcards ♪
Every month you use the card, we will send you one original ayu postcard of random design!

Movies, video clips and PC downloads for LIVE DVD & Blu-ray “ayumi hamasaki COUNTDOWN LIVE 2012-2013 A ~WAKE UP~”, released 8 April (Mon), are now available for download on Mobile and PC sites! Classic songs like “Who…” and “MY ALL”, and popular tracks from latest album “LOVE again”, such as “You & Me”, “Song 4 u” and “Missing”, plus never-before-performed songs like new tracks “Wake me up” and “snowy kiss”. A grand setlist illustrating a legendary night, a must-check!!

Notes
*Details for the customer are available at each of the sites.
*Contents and service may differ for each device. Please sign in at the site and check before downloading.

ayumi hamasaki 15th Anniversary TOUR ~A BEST LIVE~ was held for 2 days at Saitama Super Arena, with a premium setlist determined through fan votes. From the beginning of the show till the end, it was a live in which every song was filled with unlimited emotion!

END_OF_DOCUMENT_TOKEN_TO_BE_REPLACED

And today, together with the tour’s start, this tour blog is starting too ☆ We’ll be uploading lots of content, including scenes of our troupe backstage, each of the concert venues, commemorative photos of all the fans who came to support the live, and more!

And so, for a sudden start with this entry, I’ll introduce the tour goods!

The area around the venue has been specially set up like this!! 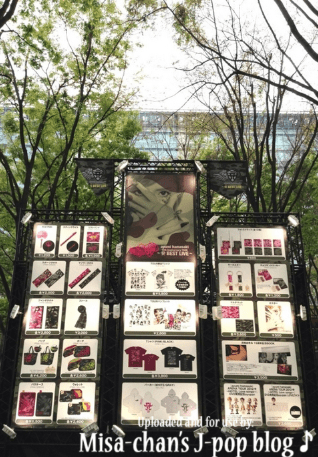