Trying to follow my thundering heartbeat
Why can’t the present be the most precious time?

“Though I won’t say “I told you so”
Isn’t it time to cultivate a discerning eye?”
I hear that so much, but in reality
What is true love?

Is there anyone who hasn’t gone astray?
Because we still have memories as records of our past

END_OF_DOCUMENT_TOKEN_TO_BE_REPLACED

In Hamasaki Ayumi’s 15th debut Anniversary year, the much-awaited “photobook” and “STYLE BOOK” will be released!
The first chapter will be a private-style photobook shot in ayu’s private residence at L.A., similar in style to “uraayu ayumi hamasaki asian book”.
Get a taste of ayu’s real everyday life, with photos of her in her personal clothes and items. Featuring relaxed expressions not to be seen anywhere else, and even shots of her wrapped in sheets in her bedroom, get intimate with a smiling ayu who is almost within reach in this warm atmosphere! 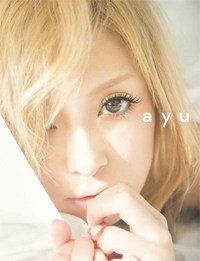 *The special page can only be viewed from 22 October 2013 (Tue) 18:00 onwards. Access before this date will be denied.
*Preorders will begin from 23 October 2013 (Wed) 12:00 onwards. Access is possible before this date, but the goods will not be on sale.
*Note that site access is dependent on time zone.
*Ordered items cannot be cancelled.
*Chapter 2 details will be released at a later date.
*The fanclub will not answer any inquiries regarding the goods and sales. Please utilize the “Inquiry” function on mu-mo shop’s page instead.

Newly composed track “Pray” has been selected as anime movie “BUDDHA2 Tezuka Osamu no Buddha -Owari naki tabi-“‘s theme song! The movie will be released on 8 February 2014 (Sat). It has been 12 years since Hamasaki Ayumi last took up the challenge of an anime movie theme song, since 2001’s “Inuyasha Jidai wo koeru omoi”‘s “no more words”! The song will be included in a release next spring! Please look forward to it!

※More information will be released at a later date.

Hamasaki Ayumi’s well-received 15th Anniversary Arena Tour will be released as a LIVE CD & LIVE DVD/Blu-ray soon!
Furthermore, preorders made at the tour venues will get a free download of that day’s “live soundtrack” as a free gift after the show!!

“ayumi hamasaki 15th Anniversary TOUR A ~A BEST LIVE~”, the nationwide arena tour to celebrate her commemorative 15th Anniversary, is just as the title describes, a collection of the “best of the best” tracks performed live at 14 locations for 28 shows. With ayu’s wish to “choose songs together with everyone who has supported me thus far”, all tracks ever released in the past 15 years since debut “poker face” were put up for fans to vote, and a tracklist featuring the very strongest hit songs was created for this everlasting keepsake premium live!
The end to this 2013 tour will be held on 28 July at sacred ground National Yoyogi First Gymnasium, of which a complete recording will be made for release!

The limited first press edition of the DVD/Blu-ray will come with a photobook filled with precious photos from tour rehearsals and backstage shots at all the different tour locations! Photographed by Ryan Chan, the one who created the well-received photobook “15th Anniversary BOOK” released as part of the tour goods, and with a commentary written by Tsuriya based on ayu’s real quotes, this proves to be a grand release!

Furthermore! All customers who preorder the LIVE CD, LIVE DVD/Blu-ray at the tour venue’s CD booth will be entitled to a free download of the “live soundtrack” of one of the songs performed during that day’s performance, a super rare gift limited to each day!! This is a first for ayu, so please do check out this precious gift of a memento of “that day’s voice”!

A selection of the best 14 tracks from the finale shows of the 15th Anniversary nationwide arena tour “ayumi hamasaki 15th Anniversary TOUR ~A BEST LIVE~” (27~28 July @ Yoyogi First Gymnasium) in the first ever live CD! The best hit songs taken from a setlist of fan voted “best”s. Featuring impressive live vocal performances and ayu’s emotional voice, ayu’s “song” can only be heard in this CD!

Includes fan favourites “Key ~eternal tie ver.~” and “teddy bear”, performed during the two finale shows, as well as 15th Anniversary commemorative track “Tell All”! Accompanied by the live band and audience cheers, the essence of live performance can be found in this best live album!! 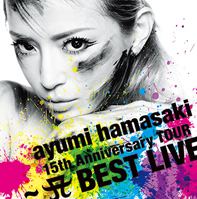 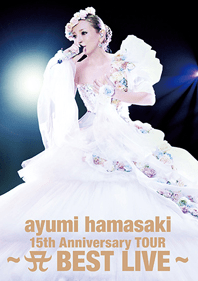 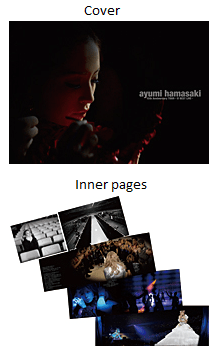 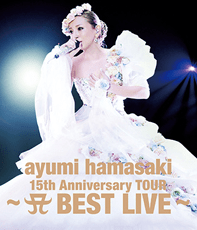 Contents (identical for all 4 releases)

END_OF_DOCUMENT_TOKEN_TO_BE_REPLACED

from Dearest single + I am… album.

Whenever I feel this way
I just close my eyes
And you’re there, smiling

Maybe everyone is sad
Even though we’re forgetful creatures

END_OF_DOCUMENT_TOKEN_TO_BE_REPLACED

from Sunrise/Sunset ~LOVE is ALL~ single + Rock’n’Roll Circus album.

Stay with me more
Make me believe more

Slightly insensible, and awkward
That’s what I like about you

But just sometimes, please be more aware
Of a girl’s heart

To stop acting tough and be more honest
It’s not easy for me to be that way, but
You are essential to me
That’s something that’ll surely remain unchanged

Gently whispering of
Gentle and strong love
Will it reach you?
Will it resonate in your heart?

Even with all my might, I can’t step out
I mean, I’ve got all reason to be afraid
All considerations taken
Maybe being myself is not enough

Stay with me more
Make me believe more
Am I truly reflected
In your eyes?

Stay with me more
Make me believe more, I wish for that
Am I being too demanding?

Always stay with me
Always believe in me

Hey, gently whispering of
Gentle and strong love
Will it reach you?
Will it resonate in your heart?

END_OF_DOCUMENT_TOKEN_TO_BE_REPLACED

from Sunrise/Sunset ~LOVE is ALL~ single + Rock’n’Roll Circus album.

Come closer to me
Trust me more

Smiling with innocence, that face
Which I love so much had been

Shining with your tears just moments ago
I know that

“Show me your true self”
It’s not easy for me to say that, but
No matter what self you show to me
I’m confident that I can accept it

Hey, with a louder voice
Shouting a larger love, I want it to reach you
To resonate in your heart

With a louder voice
Shouting a larger love, if I can do it
Maybe I can reach you a little

If I say that I’m not afraid
Then I’ll truly be lying, but
All considerations taken
I’m prepared to take it all on

Hey, come closer to me
Trust me more
Can you hear the beating
Of my trembling heart?

Come closer to me
Trust me more, I wish for that
Pay attention with the ears of your heart

We are not perfect
I mean, we are humans afterall
But I think that it’s alright
Because that’s what’s precious about us

Hey, with a louder voice
Shouting a larger love, I want it to reach you
To resonate in your heart

With a louder voice
Shouting a larger love, if I can do it
Maybe I can reach you a little

END_OF_DOCUMENT_TOKEN_TO_BE_REPLACED

In the midst of our journeys
How many times do we notice the crossroads?
Then, how many times could we choose
Guided by the voices in our hearts?

The darkness called tomorrow which noone knows about
Beside you, I stretch out with all my might with this hand and swear

Sorrow for my own sake
Losing my own form

Believing in a scenery nobody has seen
Beside you, I pray for that place which doesn’t exist

The darkness called tomorrow which noone knows about
Beside you, I stretch out with all my might with this hand and swear