But~
there’s just so many happy things, so many that they’re overflowing
that I wished to tell everyone about since long long ago- 😍❤

Actually~ For the 3B event “Ore no Fujii” on 4 January,
I formed up the unit “Tenkasu Trio” limited to just that concert
with Ebichuu’s Hinata and Syachihoko’s Chiyu.
We also performed an original song 😍🎵❤

The song’s name is
“Eien no Trinity” 🎵

It was a totally new experience for me,
so I was nervous, in a different way from when I’m with Momoclo,
like my heart was beating so hard that it would burst!!
It was tough (*Θ*;)

But it was great when we sang and it felt wonderful! 😍❤ ✨

Hinata and Chiyu also gave me lots of encouragement,
and it made me want to work even harder.
I hope that we can do this together again ✨✨

And so,
that was our first live for the year ✋

…So,
this is something that’s often done at the beginning of a year…

It’s the time
when everyone starts off something new, either with work or with their lives, right?

Ah! By the way, an extra story…

On our way home from our shrine visit,
I had my first shopping trip- 👣

But almost everything nice was sold out,
and only the leftover goods are still remaining in the stores ← I’m exaggerating slightly ^^;

But in that midst,
I managed to dig around and uncover some things,
and I bought a wallet, boots and muffler in the end-

Alright,
I don’t have any nice punchlines to end off this entry… (lol) 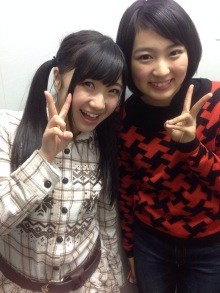 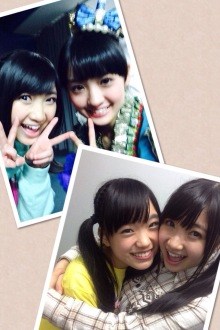 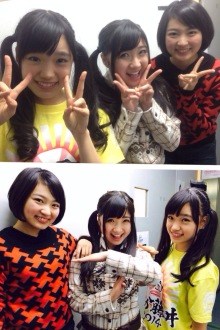 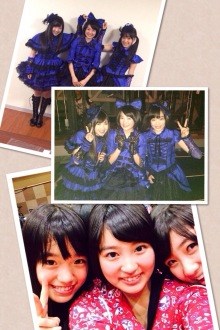 Notes:
1. “2 bows, 2 claps, 1 bow” is the procedure for prayers at a Japanese shrine. More details [here].
2. Drawing fortune or Omikuji is done at a Japanese shrine. More details [here].
3. Tenkasu Trio is an “Ore no Fujii”-limited group consisting of Ariyasu Momoka, Kashiwagi Hinata from Shiritsu Ebisu Chuugaku, and Itou Chiyuri from Team Syachihoko. Tenkasu are the crunchy bits of deep-fried dough produced as a by-product of cooking tempura.