Posted on 2014-04-14 01:23:03We performed at NHK’s Nodo Jiman today! ^ ^I used to watch the show every week with Grandma when I was a child, so hearing that familiar ringing bell live today was so emotional!Some of the performers at Nodo Jiman performed Momoclo’s Kaitou Shoujo and Hashire, and it made me so happy!After the broadcast, we held a mini-concert where we sang Dodonga bushi and Hashire!Thank you to everyone who joined in and made merry with us!And then!Mori Shinichi-san was one of today’s guests too. You know, that Mori Shinichi-san, who performed the song Erimomisaki.Before the show, he said “I know there’s a girl here who can sing Erimomisaki. Let’s sing it together!”!That just shook Takagi to the core ((((；ﾟДﾟ)))))))I was so super happy!But to sing in front of that person…He saw that I was really nervous, so he said “It’s alright. Just enjoy yourself ^ ^”!Is it ok for Takagi to cry? How can anyone be so kind…?And then, the dream collab ☆It was really like a dream!Thank you so much to Mori-san for taking the lead during the show!Takagi was really glad to perform on Nodo Jiman, and to do a dream collab with Mori-san!It was the best day! 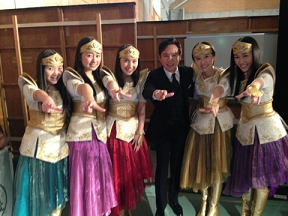