Arghh———!! One week…
Really passes by so fast— (* *;)
It’s already the weekend in the blink of an eye…
Last weekend, I met with lots of people
and received many warm cheers and praise
Lots of people watched Ustream too
So this week
was full of joy for me… (*^^*)
Thank you so much, everyone ♪
Anyway, it’s been getting really cold,
has anyone caught a cold??
That’s right,
I’ve seen some comments of some of you falling sick…
Please get well soon （； ；）
At this point,
lots of big announcements have been made too
about “Fujii to yome no nanokakan sensou”
and finally
the movie “Maku ga agaru”…

Onna matsuri is coming soon too ♪
Ah! Rehearsals have just begun
and Yumi-sensei is already all pumped up ☆
Everyone~ Please look forward to it— (*・Θ-*)
And then ♪
About “Maku ga agaru”
…Was everyone surprised—?!
It’s Director Motohiro of “Odoru daisousasen” fame— ☆
It’s become a reality for us (* *)
At first, the thought of us
appearing in such a big movie…
Really made us so nervous
But thanks to the passion and teamwork of the director, producer
and all the staff members,
we were naturally guided
into this world we’ve never explored before (especially for me, who had a midwestern role which is totally not my usual self)
and we slowly started to learn how to act (*’-’*)
We’ve not seen the completed product yet
so I can’t comment on it,
but I have a feeling that it’ll surely be wonderful
and something which is totally different from anything we’ve done so far
That’s my secret feeling ☆
It’ll be released on 28 February,
and stage plays are scheduled to start in May too
(We’ll go all over Japan to meet everyone— ♪)
Everyone, please look forward to it— （*^Θ^*）

Ahh— I’ve been wanting to tell everyone about it~
And now I finally can (*^^*)
I’ve been itching to do so since summer de-ariyasu (laugh)
There have been people who’ve gone and read the book already,
and that makes me glad ♪
The original book is really wonderful,
so please read it before watching the movie (*・Θ-*) 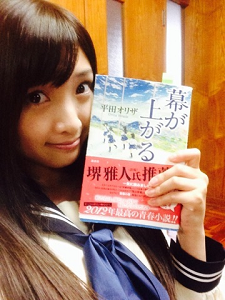 Anyway,
I’m really thankful everyday
for the chances given to us to take new steps de-ariyasu （*^Θ^*）
And so,
Today’s BGM is, of course,
reflective of my mood now, “Ashioto ~ Be Strong”,
whose PV has just been released ♪ 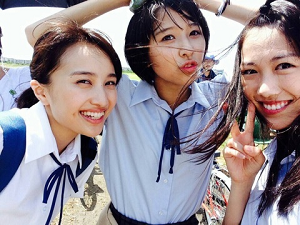 It’s an original script by Hirata Oriza-san,
and the director is Motohiro Katsuyuki!

Actually, we did the filming
in summer this year (。-∀-)

There were lots of firsts for us,
and it was really really productive because we learnt new things everyday! (＾ω＾)

I totally didn’t understand anything at first, but when I slowly started to pick up all the professional lingo used on set, I felt really happy! (。-∀-)

For example, the clapperboard meant that we had to hold our pose,
and at first, the staff had to shout at us to
“Hold——!”.
I’d like to think that the clumsy me had grown out of that by the end of filming! (laugh)

The release date is next year, but for those who wish to find out more: The director and staff of “Maku ga agaru” leaked some information on Ustream yesterday. (laugh)
Please watch it if you can!

I hope that lots of people will watch the movie,
so I’ll continue to work hard till the release date (*^^*)

Look forward to it~! 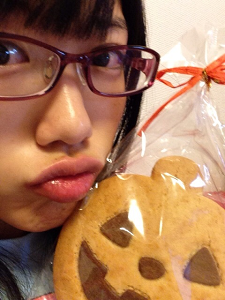 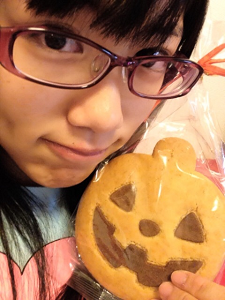 Konnyachiwa!
So! What did everyone do for Halloween—?
Mama woke me up really early and asked “Do you have anything to say?”. So I replied “Trick or treat”, and she happily presented me with sweets with a “Ta-da!” (laugh)
We’re a happy family!
So, it’s already November. ❤And from this month on, I’ll finally get my own room— *(^o^)/*
So much fun!
There’s lots of events in November, so we’ll be dashing through all the way!
And news about the movie was released yesterday too! Things are getting so exciting!

Everyone, do you know about it yetー?

And then, we just announced it on Ustream too!

Thanks to everyone who watched itー! ❤

Aarin was watching the news this morning too,
and she felt relieved, thinking “Ah, finally we have announced it to everyoneー!” (^ω^)

We’ve been filming everyday
from late August to early October

All the actors…
And the members.

And the director and staff members.

Everyone was perfectly focused on the project,
and everyday just felt really productiveー.

And we have been awaiting this day
to finally tell everyone about it!

But,
even we have seen noーーーーne of the edited footage

Even the footage for “Hashire!”, which was just released,
we watched it for the first time with everyone (laugh)

Though we don’t know how it’ll all turn out

Director Motohiro and Kawakami-san (← surprisingly)
were full of praises!!!

That’s because we put our whole souls into it!!

So Aarin thinks it’ll be a work we’ll be truly satisfied with.

More information will gradually be released, so please check it out, everyoneー! ( ˆoˆ )/ 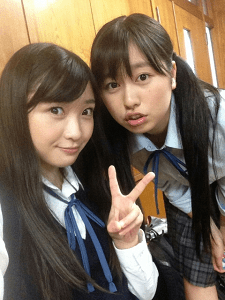 Aarin wishes that lots of people will watch it.

from Kibou no WA single.

Hey, do you remember? The sky we looked up at with the beautiful moon
“It’s cold”, you said as you held my numb hand for the first time

To be with the person I want to be with
Such happiness, I want to protect your smile
For you, for me, forever

If we had not met, where would we be now, what would we be doing?
Just thinking about it makes my nose scrunch up

Surely, these overflowing days
We will change them lovingly to our special time

To be with the person I want to be with
I want you to just hold me, without saying a word
I want to reaffirm your warmth

To be with the person I want to be with
Such happiness, I want to protect your smile
For you, for me, forever

Beside you, beside me, surely

END_OF_DOCUMENT_TOKEN_TO_BE_REPLACED

from Kibou no WA single.

Embraced by white light
A voice I long to hear on the flowing clouds
On the other side of tears, I promised not to forget

This tiny prayer will someday soar into the sky

Kindness for others is what connects the world
Gone faraway, smiling, forming a ring
I want to deliver hope now

Seasons change, dreams start to bud
I was saved by many meetings
I want to see you again, the one who gave me smiles

Surely, yes, we are not alone

Kindness for others is what makes us strong
Let’s do something, stand up again and again
Hope is here right now

Let’s sing to deliver to that sky

END_OF_DOCUMENT_TOKEN_TO_BE_REPLACED

Words I want to speak and words I can’t speak
My week is filled with such stashed away words
To fall so much in love with someone
It’s my first time, you don’t know

Hey, whenever our eyes meet, I avert my gaze
I want to change my contradictory personality

I can’t hide anymore in this valley between friendship and love
It’s alright to release these highstrung feelings of anxiety, right?

fantastic baby love
fantastic growing love
Though I wish to deliver these feelings to you
“Just how much do you love me?”
Such words