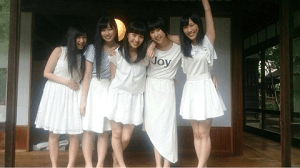 Today’s performers were
all members of the special unit for the Nippon Broadcasting Opening 60th Anniversary Commemorative song “Wasurarenu Music”, which means that

We all performed “Wasurarenu Music” live for the first time!!!!

Isn’t that just so grand?!!

To be able to take part
was like a dream!

And then, I’m late, but I might as well announce it here as well..!
Our appearance at this year’s Kouhaku Utagassen has been confirmed!!!!

Thanks for all the congratulatory comments!!!!

I’ll work hard with all my might to let everyone all over Japan have a great time in their living rooms this year too!!!!

I was eating pino, and realized I got a star-shaped one