Since her divorce, singer Hamasaki Ayumi has been updating Twitter in English about her mental state and well-being. Hamasaki has been tweeting in English frequently in recent times, and when she was interviewed by CNN a few years ago, she also answered some questions in English.

As her ex-husband is an Austrian, English would have been their main language of communication, but just how good is Hamasaki’s English?

“She makes some grammatical errors, but understanding her is not a problem”
Hamasaki has always been actively tweeting. Before the divorce announcement, she tweeted 8 times on 14 Jan and 12 times on 13 Jan, and included some English phrases. On 23 Jan, she wrote the following tweet in English, “Never regret anything coz at one time it was exactly what u wanted”, together with a picture of herself running towards the sea.

Hamasaki’s style of English is unique. Since Twitter only allows messages of 140 characters to be posted, she often uses abbreviated words. For example, “for” becomes “4”, “because” becomes “coz”, and “by the way” becomes “btw”.

International translators who analyzed Hamasaki’s English tweets concluded that “she makes some grammatical errors, but understanding her is not a problem”. Her frequent use of abbreviations shows that she is familiar with English in the written form.

How about her speaking ability? Video sharing site “YouTube” contains clips of Hamasaki Ayumi interacting with overseas fans as she signed autographs for them. In a video from Jan 2010, Hamasaki was signing an autograph along a street in London. Peering at the CD in her hand, she asked, “There’s a “Paris” written here, whose is this?”. In another instance, she replied “Funny” to a fan’s comment. She appears to enjoy conversing in English.

In July 2008, a video shows Hamasaki in Hong Kong. Alighting from her car at the hotel entrance, she immediately walked towards the fans to sign autographs. When a pen given to her seems to have run out of ink, she was heard commenting, “It doesn’t work”. When a man asked if she had anything to say to her Hong Kong fans, she jokingly replied in English, “Yes, I’m really tired”, with a smile.

Too Much Tongue-Rolling when Pronouncing “R”
In 2006, Hamasaki attended the interview session for CNN’s “Talk Asia”. Though she conducted most of it in Japanese, she did answer some questions in English.

At the start, when asked about the reason behind her then-newest album “Secret”‘s title, she explained in English, “Everyone has a secret, right? Me too, and probably you too. But when you tell it to others, it’s not a secret anymore, so I can’t tell you”. In the end, she added, “I hope this album will stay in everyone’s hearts”.

Although it was a long interview, what is of interest is Hamasaki’s body language when she speaks in Japanese and English. When she answered questions in Japanese, she leaned back in the chair in a comfortable position, thinking as she spoke. When speaking in English, she leaned forward, overusing her body and hands to express herself. The inflection of her voice and her facial expressions also differed greatly from when she was speaking in Japanese.

The translator mentioned earlier looked through Hamasaki’s interview and concluded that she was “excited and tense”. He criticized her overeagerness at answering questions in English, which went against her normally calm and composed nature. He also commented that “Japanese people easily fall into the trap of speaking like awkward Americanized people”. In addition, she had the tendency to roll her “R”‘s more than is necessary. If this is carried too far, it becomes hard for the listener to understand what is being said. There were also times when the content of her answers did not match the interview question, implying that she “needed to hone her listening skills”.

Nonetheless, the translator emphasized that, “as a musician, she set a good pace to the conversation. Having a good pace is more important than pronunciation when trying to get through to the listener”. 5 years after that CNN interview, there is a high possibility that Hamasaki’s English conversation skills have improved greatly. 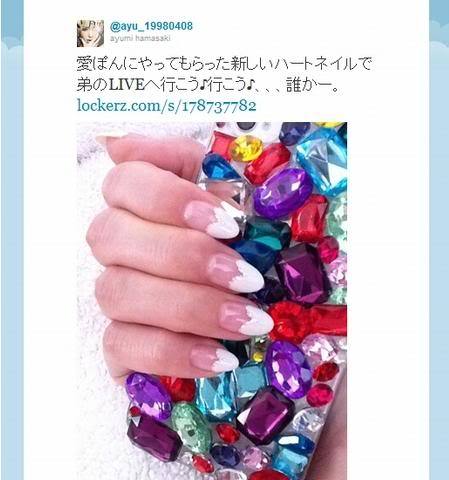 Hamasaki revealed her “heart nails” on Twitter the previous day, inciting comments like “I want to copy that” from many fans.

Miss Sakoda Aiko from salon “esNail”, who did the manicure, also received many questions from fans via Twitter. It was a trending topic with a large impact.

The “heart nails” this time is a refreshing design, with white hearts drawn on the tips of nails coated with clear polish.

and other such praises.