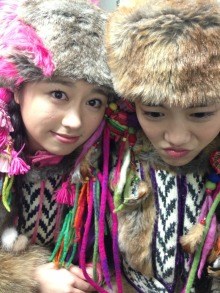 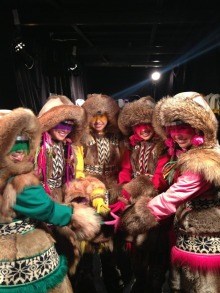 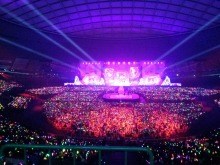 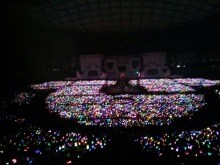 Momokuri 2013
at the frozen Seibu Dome!

We’ve held concerts at Seibu Dome twice so far, but the place seemed the most filled this time!
I was so touched in that moment during the opening, when we could see the entire Seibu Dome from above.
At that moment yesterday, I felt that Seibu Dome was the most beautiful place in the world.

And then, athlete Suguri’s skating on the rink on stage was so beautiful, and Momokuri 2013 began on that emotional note.
The first block started off with the most energetic songs, and when we finished, it was so hot. Was everyone alright?
There were people who had stripped down to tanktops, and it got me a little worried… (laugh)
But I saw it.
Everyone’s power had reached us, and we managed to dash through to the end successfully!

Reni-chan’s magic trick of sawing a person in half was successful too! Was everyone shocked? (laugh)
And we sang 2 new songs too!

And then, the announcement of the concerts at National Stadium. To everyone present at the venue.
Everyone was so shocked that nobody could speak for a moment.
Scenes of all that we’ve done and all the memories started running through my head in that moment, and I couldn’t help it as I ran along the track around the Dome, looking at the Mononofu’s smiles, tears, listening to their words of encouragement, and seeing the staffs’ faces, and also Mum and Dad’s faces, which left me speechless.

Momoclo is not made up of just us members, the staff, Mononofu, but also everyone whom we’ve ever met, all come together with smiles and tears to create Momoclo.
I’m so glad to be a part of Momoclo so I could meet everyone. I’m so happy it hurts.
So happy that I’m a little afraid!!
The National Stadium dream! Even now, it seems like a joke, and I can’t express my feelings adequately with writing or words, but I wish to tell of it through my heart and with my performances, bit by bit, in my own way!

What’s visible to our eyes is not everything, we’re always connected by something we cannot see, so let’s all stand shoulder-to-shoulder and progress moment by moment into the future!

Back on topic, yesterday’s Christmas live was really wonderful, thank you!
To all the Mononofu around the country watching the live streaming, all the Mononofu smiling at us at the venue, athlete Suguri who put up such a wonderful performance, and the downtown Momoclo band who played so warmly for us in the cold!

Thank you so much for the very very best day!