Posted on 2014-04-08 10:15:41Takagi Reni has taken on the role of police superintendent for a dayfor the prefecture of Yokohama, my birthplace!The event was held at Minato Mirai. I was a little worried at first, as the Mononofu did not receive news about the event until the last minute. So I was really relieved to learn that everyone still rushed down despite receiving such short notice ^ ^And then, the Okano High School ensemble performed GOUNN, and also Kaitou Shoujo as an encore!!It was an awesome performance!And the best part was that it was meant as a surprise, so I totally didn’t know about it! So happy ❤At the end, everyone gave me a “Z”!Yokohama is famous for kiyoken too!I got the chance to take a photo with kiyoken’s mascot, Hyou-chan ^ ^I was born and raised in Yokohama, so to come back as Takagi Reni of Momoclo and take on this wonderful role was a service I was glad to serve!This event was to raise awareness on road safety, so everone, let’s stop speeding and using our mobile phones while driving!I love Yokohama!I hope to get more chances in the future to serve here again-! 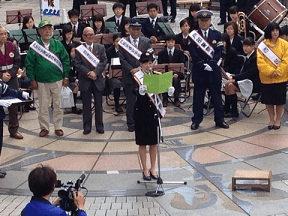 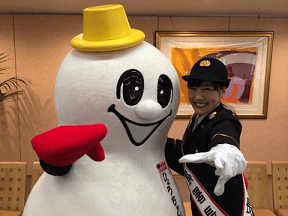