from Thank you album.

Even now, the beach is still bright white sand, I need a parasol
The wind blowing, the trees swaying, my glasses are flying off
The road along the coast is the same

The abandoned house with frightening ghosts is no longer there, replaced by a store
The harp playing, my heart is restless, I set out alone
The road along the coast is my story

The road along the coast, at the end of the road

OK, let’s go. I wonder in which direction. Watching over that vast ocean
OK, let’s cry. I wonder if it will improve my mood. Still watching this carefree me
OK, come along. Taking your small defenseless hand in mine, I’ll bring you along
They’re waiting for us

END_OF_DOCUMENT_TOKEN_TO_BE_REPLACED

Hamasaki Ayumi: Tears during Encore “We have overcome many things” Finale for Nationwide Tour Postponed after Earthquake Disaster 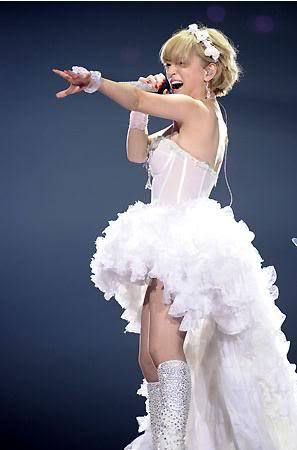 Singer Hamasaki Ayumi (33) concluded her nationwide tour 「ayumi hamasaki ～POWER of MUSIC～」 on the 19th at Saitama Super Arena. In summary, Hamasaki stated that “Today is the finale! We have overcome lots of different things thus far…”. Following that with “For all those who can’t take part today, let’s sing, dance and party for them!”, she stirred the spirits of the 25,000 audience members.

During the encore’s charity song 「A Song is born」, she seemed overcome with emotion. Crying as she sang, she continued on passionately despite stopping many times because of her tears. Starting out with new song 「progress」, the nationwide tour included 21 songs including the encore, performing at 10 locations around Japan, with 28 shows and about 280,000 audience.

The tour, which was planned to begin from 9 April, was postponed after the Eastern Japan Earthquake Disaster. The 8 shows from 9~30 April, as well as the 2~3 July shows in Miyagi Prefecture’s Sekisuiheim Super Arena, were cancelled. With a new title 「ayumi hamasaki ～POWER of MUSIC～2011」, the tour began anew. With the “power of music” as its theme, Hamasaki challenged the 360-degree centre stage, and used a full orchestra as a base for the entire concert.

The original concept of the tour did away with huge stage props, flashy performances and even costume changes. As the affected regions started to recover, Hamasaki wished to send out the message “Let’s not remain in sorrow, but face forward and progress, while never forgetting this”. The setlist and performances slowly evolved, with the addition of special effects and costume changes. During the finale, she revealed 9 different costumes, and together with 13 dancers, 6 performers, 8 band members and 16 orchestra players, the live was brought to the grand close.

October’s new setlist included new song 「progress」, performed in a mini-dress adorned with ostrich feathers. 「BRILLANTE」 was sung with a strong voice, accompanied by flaming torches and a long red dress. Halfway through the show, guests Urata Naoya from dance-vocal unit 「AAA」 and JUNO, Korean boyband unit 「JYJ」 member Junsu’s elder twin brother, gave passionate performances of 「ANother song」 and 「Why…」 with Hamasaki respectively, in the midst of cheering audience. 「SEASONS」 was performed in a pink tutu dress, and she engaged the audience with the words “Everyone here, sing this song with me~”.

With regards to this tour, Hamasaki gave a comment to the media, “From that day (of the disaster) on, moment by moment, Japan’s situation is changing. I hold this fact, plus various emotions and events along the way that I will never forget, in my heart, and the live continued to evolve. And because I believed in the power of music, I managed to pull through to the very end”. Happily, she added, “I will continue to sing, hoping to bring love and hope through my songs to all those people around Japan who are still holding on”. This live was also broadcast to a limited audience of 15,000 on 「Ameba Pigg」.