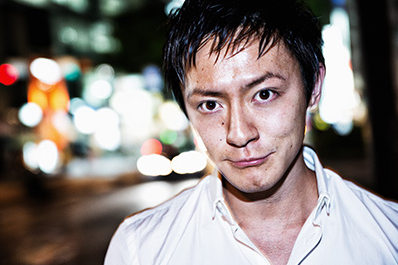 In November last year, artiste Hamasaki Ayumi was spotted in Paris on a loving date with her new lover, “Maro” Uchiyama Maroka, a former dancer.

Both parties had announced the relationship as official on their blogs. After that, Uchiyama got caught up in a divorce case, and problems with other women also started to surface. In response to bashing from fans, he disappeared from the stage.

A few months after the incident, on 1 May, Uchiyama’s blog, which had been on hiatus, suddenly came to life again. There was a video updated on the blog that day, titled “Debut”, and showed Uchiyama earnestly speaking about his wish to re-debut.

After losing everything, “Maro” fights to carve out a new future for himself.

―― Your fanclub site and the message on YouTube were both unveiled on 1 May, so is that considered your re-debut date?

“The start of Hamasaki-san’s tour was scheduled for mid-April, so I couldn’t announce that I had left the troupe until that was over. After the tour began, I started my own preparations.”

――What was the general reaction to your announcement?

“Well, with regards to the video, there were many who felt that it was “low-grade”, and that they had never seen such a hateful video. (laugh) However, I’m glad that many people actually watched it, and for that, I have to thank Hamasaki-san.

――You talked about how you led a homeless life for about 1 month. How did that happen?

“I have family and friends in Tokyo, so if I had wanted to, I could have asked them for help. But I’ve reached this stage because of my own decisions, and to fall into this situation… I won’t be able to forgive myself if I had asked for help from people who would say “I told you so”. I have family, but even asking for “a warm place to sleep” would have sounded needy. At that time, I felt that I needed to do some self-reflection, rather than talk to people. So I left my things with a friend, packed up about 4 days’ worth of clothes, and went off to think.”

――That happened in January this year, right? Did you stay outside in the cold?

“I did stay in a hotel, but I also did spend some nights in the parking lot of an apartment complex somewhere.”

――After experiencing the homeless life, you travelled to Los Angeles, right?

“I needed some photos for my fanclub site. I thought lots about how I wanted to project my image, and I remembered Los Angeles. I’d lost all my photographer friends, so I actually had someone introduce a new photographer to me, and we worked together.”

――Did that video contain the true message you wanted to deliver?

“No. There were so many things I wanted to say, but that would have dragged the video, so I did not say them. For example, I didn’t get to explain why we’re asking for an annual membership fee of 10,500yen for the fanclub.

“We decided on that not because I needed money, but because I want to take things seriously, so I want only fans who will truly support me. To the fans who believe in my ability to stand on stage and have forked out their money, I will never betray them.”

――What made you decide to finally re-debut on your own?

“When I lost everything, it was true that I felt despair. But on rainy days, when I go shopping and my car piles up with stuff, and my beloved dog is by my side, I do feel a sense of happiness and excitement. With the divorce over, I could finally take back my original name after 8 long years, and it really refreshed me. And while it’s true that I still need to provide for the family, I just felt free, and that I could decide my own life, so I just thought, “Yosh, let’s do this!”.”

――You’ll be acting and singing from now on, so does that mean you won’t dance anymore?

“Dance was one means to express myself, but I can’t go back to being just a back-up dancer. It’s not that I can’t do it if she’s not there, but I want to do things which I feel that I can do. Not that I think that I’m good at singing, but I can create my own music, and I really want to deliver my message of “It’s ok to lose everything. Just love.”.”

――Uchiyama-san’s blog also features the word “love”, so the message is coming across.

“My previous tag phrase was “The world will be ok with “love””, and I still believe that. All things that happen on this earth, good or bad, including war, happen because of love.”

――You plan to work on indies music first?

“Yes. I plan to produce a CD, and I’ve got my chords and lyrics done.”

“I don’t have a professional producer, so I don’t think it’ll be a usual pop song. I’m putting together the chords on my guitar now, and am pouring my heart into it. As for acting, I’m currently going for auditions.”

――Let’s talk abit more about what happened before the re-debut. How long had you been Hamasaki-san’s dancer?

――Did you follow all the news about the two of you last year?

“I was overseas then, so I didn’t manage to catch it all, but I’ve heard about it from others…”

――Were there any things which the media got wrong?

“Lots of it. The worst was how my ex-wife, whom I’ve been separated from for the past 5 years, got portrayed as a victim. (laugh) The media was calling them my “beloved” and “beloved child”, saying how they were the true victims, and even though I clarified that “she is not my beloved, we were just dating”, everyone just started boo-ing me. There were things I wanted to say, but I couldn’t.”

――And then more and more information leaked out.

“When I decided to go steady with Hamasaki-san, I knew that I would become “bashing material” once the media found out more and reported on me. But even with that realization, I decided to stay together with her. So when the reports did come out, it wasn’t too much of a shock. That’s because I knew what was right in my heart.”

――You seem to be giving lots of interviews lately, and you wrote about how you had no control over what others thought of you?

“Giving such interviews is depressing for me. For example, everyone asks “Have you broken up? Are you still together?” and I answer “You make your own decision, judging from how things are now”. Then they would continue with “Do you have a girlfriend?”, and I answer “Not now”. Then they’d say, “So you’re not together anymore”. These reporters are so sneaky, I don’t even know how to fend them off. (laugh)”

――Even so, thank you for this interview today. We’re looking forward to seeing your future works.

“The world now is full of apathetic people, so I want to become more powerful. I want to shout with all my might that the answer to my dreams and ideas like “world peace” is love, so I’ll be glad if you can support me.”