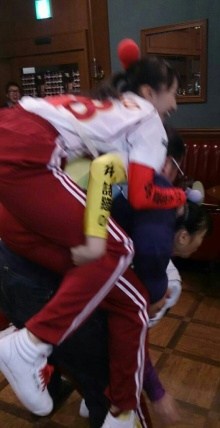 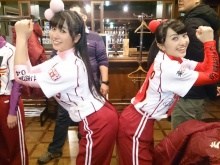 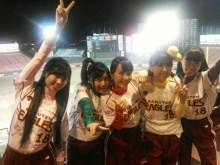 What were we doing? (laugh)

These were taken during the Rakuten fan thanksgiving event (^^)/

It was so fun!

We performed DNA Rhapsody, which Maa-kun uses as his entrance theme, and Hashire!

I joined team iwate for the relay race too, and won a gold medal (*´`*)

Once again, to all the Rakuten Eagles, congratulations for being Japan’s No.1!!!

And then, the GOUNN tour welcomed its finale at Sendai on Friday!

This time, we made a point of visiting venues we hadn’t been to before,
so the mood at each venue was totally different depending on where we were.

The setlist remained mostly the same,
but each show felt like a completely different concert, and that was fun (*^^*)!!

This tour’s theme was “the cycle of birth, death and rebirth”.
Based on this theme, the directors, all the staff-san, plus the dancers-san and Mononofu-san came together to create one masterpiece. And that was the most fun and interesting part!!

This time, I can puff my chest out,

and say that we’ve created a wonderful masterpiece (*^^*)!! Ufu

Full of feelings of satisfaction ( ^^ )