This is Aarin, who hasn’t calmed down yet. (laugh)

Also, thank you
to all the vendors at Teshiro Park (｡･ω･)ﾉﾞ

Day 1 was just really really hot,
and Day 2 began with a little rain

Even so, it was such a joy to see everyone so hyped up
and waiting so patiently for the concert to begin!

Everyone, thank you so much.

Did everyone manage to stay healthy?

It’s true that we’ll never know what’s going to happen during the show itself,
so it’s always a “pit-a-pat heart throb” experience! (laugh)

But, really,
it’s really a chance to overcome all adversities! (。-∀-)

It was Aarin’s first concert since she recovered from her fracture
So she was quite nervous too (^_^;)

Though she did her best to hide the anxiety so that nobody would notice it! (laugh)

But once she got on stage and saw everyone’s smiles
the anxiety just melted away—!

So many Mononofu present,
with so many different guests
and so many staff members, all coming together to create Toujinsai!!

It was just the best summer festival! (`･ω･´)

Personally, Aarin thinks it’s the best summer festival in all of Japan!

Aarin really had the best fun!
Baka Sawagi with everyone is really so enjoyable ヾ(´∇｀)ﾉ

And isn’t it just so awesome, to have all the traditional festival acts from all over the country put together here in one concert?

To have all the festival dances and rituals and performances all on the same stage,
putting up a show together.

All these different music, cheers, and dances here at Nissan Stadium,
and with the Hidano Shuuichi taiko troupe and the Downtown Momoclo band playing our songs together…!

Aarin just wanted to join in–!!

She wanted to dance together with everyone—!!

She was just so hyped up
listening to the taiko drums, the festival songs, and all the folk tunes!

And,
to spend this festival with all the Mononofu. It was really the best ( *´ω`* )/

Going crazy during the concert with everyone!

She’s so happy to have created yet another summer memory with everyone… Wasshoi—————! ＼(^o^)／ (laugh)

Aarin hopes to do another festival again next year!

Every time a festival ends, it just feels like summer is already over,
and there’s this sense of loneliness—.

But!
It’s definitely not over yet!! 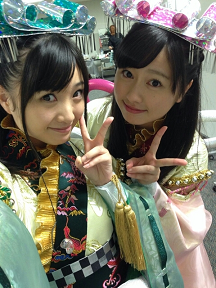 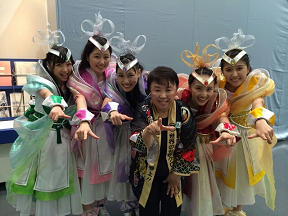 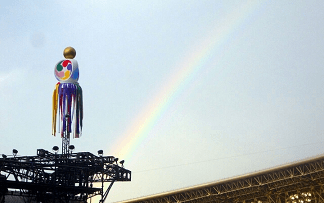 ↑ This is the current wallpaper on Aarin’s phone. (laugh)