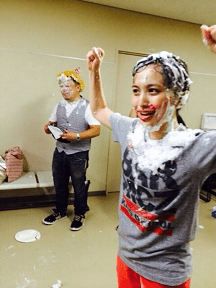 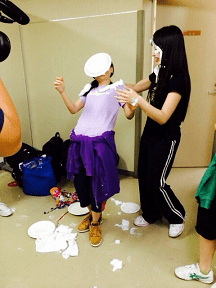 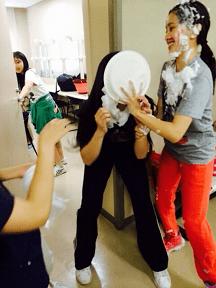 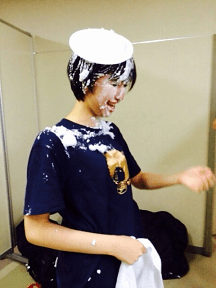 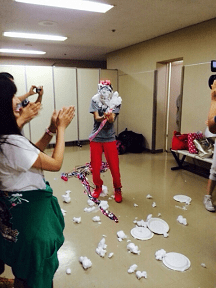 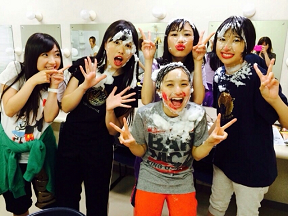 She may be silly, but she’s reliable!
I’m always saved by her!
I’ll work hard, so that I’ll always be there to support the sunny Kanako-chan!
Can we do it-?

＼(^o^)／ Kanako-
Thanks for everything! I love you!

As for the mid-lesson birthday party today, even the staff got involved!
It was like an early Baka Sawagi!
Kanako-chan!
Have a wonderful 20! 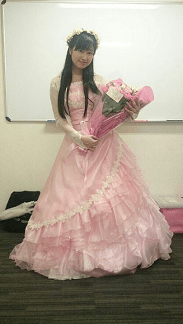 ↑ During the private showing for “Saint Seiya”!
It was the first time she walked in front of everyone!
She really loves the slanted line of white flowers on the skirt!
As well as the flower head decoration- (`･ω･´) 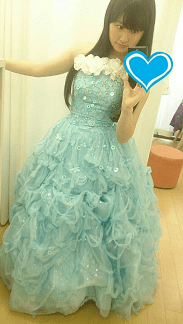 ↑ During “Koukousei quiz”!
It’s her only non-pink dress- (*´`)
Talking about light blue dresses, she wore one during the press conference for “Shirome” too-! 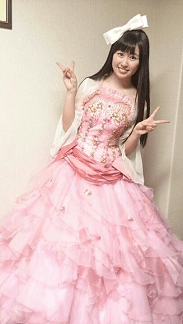 ↑ On the opening day of “Saint Seiya”!
Manager K told me that by then, it felt totally normal to see Aarin in a dress~ (laugh)
Such patterned dresses are just so cute! (*∩ω∩) 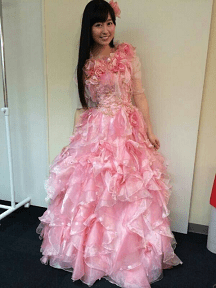 ↑ During event coverage!
The entire skirt seemed to be made of petals, isn’t it pretty?!
It just feels slightly mature! ⌒(｡･.･｡)⌒ 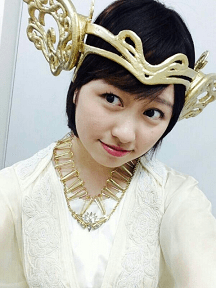 ↑ Lastly, Athenaarin ＼(^o^)／
It felt slightly embarrassing to be the only one
but she’s glad she did it!!
Sorry for not taking a photo of the full dress!

During the period of her fracture, Aarin went through
10 different dresses (*∩ω∩)

She got to put on so many cute dresses! 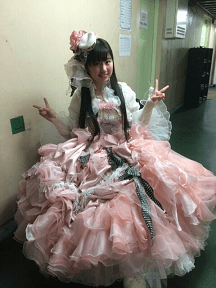 ↑ During the AE event!
It was her first dress, so she wasn’t used to it at all. (laugh)
At that time, she couldn’t possibly have imagined how many dresses she would go through by the end- 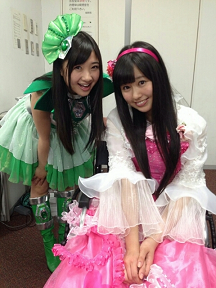 ↑ During the Japan TV hijack!
This one’s cute too-!
A two-shot with Momoka, who was pushing my wheelchair (。-∀-) 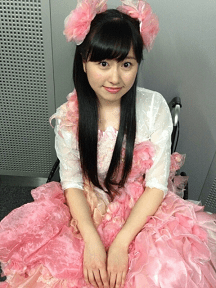 ↑ During the public live radio broadcast at Spain zaka!
It’s been a long time since she last had her hair in half twintails (laugh)
Isn’t she cute? (。-∀-)
This was probably when she started getting used to being in dresses and a wheelchair- 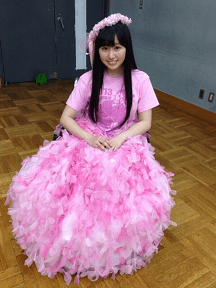 ↑ During the recording for “Bokura no ongaku”!
It’s a new style, a dress with a T-shirt (￣▽￣)
It was the closest she was to normal (laugh)
The part under the T-shirt was really cute too, I should have taken it off~ 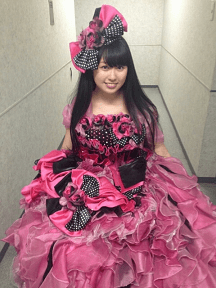 ↑ During the recording for “Momoclo-chan”!
Aarin really likes this dress~
A black and pink little devil Aarin ＼(^o^)／
It’s just rare that Aarin ever wears a dark pink costume 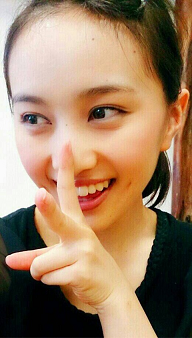 I went for Sujinashi’s movie version at Nagoya yesterday!!

I was so nervous and excited!!

It’s been a long time since I last met Tsurube-san,
and it was my first time meeting Nakai Miho-san too
That alone gave me so much joy (*^^*)

But that happened at the end! (laugh)

there was, of course, no script, and until I went on stage, I couldn’t meet with Tsurube-san nor Nakai-san, nor could I see the stage set,

I mean, I knew that’s how it’s supposed to be
But even though I knew it,
a feeling of the unexpected just washed over me. (laugh)

It was my first impromptu drama on stage,
there was an unknown atmosphere of anxiety around,
and basically, everything was new

This last assignment of my teens just gave me a view of a new world.

Tsurube-san, Nakai-san, and everyone who watched at the venue or on LV!
Thank you!!

Sujinashi is just such a wonderful programme!

I also received lots of wonderful flowers (*ﾟ▽ﾟ*) Thank you!
I hugged all the flowers in the car back with Kawakami-san and Furu-chan, and now there’s lots of them all over the house! (。-∀-)

Teens was such a fun time!
I really had the best fun-!!!

Being fashionable makes motivation ↑ go up
Puffing out our chests, girls will overcome tears and move on

As the azure wind blows
I reel in courage to myself and am Re-born
I’m no longer weak! I can grasp the hands
Of my precious friends

New arrivals, I’ll become a new me
Though I may cry sometimes as I recall the past

Unable to face with too much hardships
I ran away, I whined, but that me is no longer here

As the azure wind surrounds me
I want to go to everyone now
I won’t lose anymore. I’ll get through with these eyes
As long as my comrades are here

Friends are like lamps, lighting up
the bottoms of our hearts, giving us relief, just by smiling beside us

Tiara-ri-ru-ra, sparkling
It’s not a decoration, but light
I’m no longer afraid! I’m Princess
Everyone’s my treasure
Love is the strongest!